For years, when discussing high field-strength electromagnetic compatibility (EMC) radiated susceptibility testing, Traveling Wave Tube Amplifier (TWTA) technology has been the only available option for pulsed field generation. Now, there is a very attractive alternative to this technology. AR RF/Microwave Instrumentation is now offering high-power solid-state pulsed amplifiers. These SP-series amplifiers include various frequency ranges and output power levels to meet several standards. Additionally, designs can be tailored to suit your specific application. This application note will discuss some of the key features and benefits of AR’s line of solid-state pulsed amplifiers. Inherent to TWTA technology’s nature, there are a number of undesirable characteristics for EMC applications, one of which is harmonic distortion. TWTAs are rich in harmonic content. While many consider this to benefit the world of audio amplification, the opposite is true of RF amplifiers in EMC testing applications. When producing an electric field for EMC testing, harmonics lead to an inaccurate representation of the intended field. Many EMC specifications go as far as requiring that harmonics be below a certain threshold. Often, TWTAs have difficulty meeting these requirements. This is not the case with solid-state amplifier technology. AR’s SP-series are specified with typical harmonic content of -18 dBc or better at P1dB. Additionally, the SP-series has a much higher compression point than their TWTA counterparts, thus allowing for a wide range of linear gain.

Another extremely important feature of RF amplifiers is mismatch tolerance. In EMC applications, there are an abundance of available antennas for use in field generation. While this provides a lot of options for frequency range, gain, power handling and so on, this can lead to significant variances in the antennas’ voltage standing wave ratio (VSWR), meaning that the impedance of the antenna can vary greatly from an ideal 50Ω, thus causing reflected RF power. While antennas most often used in the frequency range in question typically have a relatively stable VSWR, this, along with chamber loading and large EUTs (common for high field strength applications), can be a serious issue for TWTAs. Generally, TWTAs have a poor mismatch tolerance and will begin to foldback or even shut off for a relatively small VSWR. Solid-state amps on the other hand, tend to have a much higher mismatch tolerance than TWTAs. For example, AR’s SP series amps will not begin to foldback until the reflected power reaches half that of the rated output power. Better still, solid-state technology does not exhibit the parasitic oscillations that occur in TWTAs.

Solid-state amplifiers also have much higher reliability than TWTAs. Tube technology suffers from numerous deficiencies in reliability, including repeatability in production, parts availability, and decreasing tube manufacturers throughout the world. Performance of the TWTAs can even dwindle when left on standby or sitting unpowered on the shelf. If a TWTA does not have any planned use, it is necessary that the user periodically run the amp to prevent the tube’s degradation. These solid-state pulsed amplifiers also have a much lower noise figure (NF) than their TWTA counterpart. In addition to the above advantages, the warranty for these AR solid-state amplifiers is 3 years, and repairs are much easier to accomplish and can be completed during a much shorter time frame.

Other characteristics of SP amplifiers include pulse widths up to 100+ μsec, duty cycles up to 10%, a front panel digital display providing forward and reflected power, as well as system and transistor status, IEEE-488 and Ethernet interfaces, and forced air and water cooling options.

AR’s line of Solid-state pulsed amplifiers are designed for a variety of frequency bands between 1 and 4 GHz. These bands primarily line up with automotive, aviation and military standards. Particularly, these frequency bands cover L and S band radar pulse testing as required by automotive standards, as well as various high-power offerings for specific octave frequencies from 1 – 2 GHz and 2 – 4 GHz as required by MIL-STD-464 and DO-160, as well as full vehicle automotive testing.

Within these frequency bands, a number of standard output power options from 1 kW to 20 kW are available. Paired with the appropriate antenna, these amps can generate a wide range of field strengths at a wide array of antenna distances. Additionally, AR has the capability to build custom amplifiers up to 150,000 W depending upon frequency and pulse conditions.

Below is a table showing our standard product lines and their applicable applications.

As previously described, the SP series amplifiers have been designed for a number of different applications. Pairing AR’s solid-state pulsed amps and high-gain antennas can provide you with a wide range of field strengths. AR’s PSP series of wideband USB pulse power sensors is a product of choice to precisely measure the pulse shape, characteristics, and peak amplitude produced by the amplifier and delivered to the antenna. The PSP series also allows you to verify other modulations’ cleanliness as required by various EMC standards. The following table gives an example of field strength levels and some corresponding applications when using an AR ATH800M6G high-gain horn antenna. This table assumes reasonable losses.

In some cases, SP-series amplifiers can be used in mission critical applications where disruption or degradation of performance can have significant consequences. As a result, users may want to perform incoming inspection or performance verification and/or on-going performance monitoring. This section provides an overview of how to use the PSP-series Pulse Power Sensors for this purpose.

To illustrate the process for performing incoming inspection or performance verification and/or on-going performance monitoring, the AR 1000SP1G2 amplifier will be used as an example device-under-test. The Model 1000SP1G2 is a self-contained, forced air cooled, broadband solid-state microwave amplifier designed for pulse applications at low to moderate duty factors where instantaneous bandwidth and high gain are required. With an input power of 1 mW applied from 1 to 2 GHz, the 1000SP1G2 provides a conservative 1000 W minimum peak RF pulse power at the amplifier output connector. Additional specifications include:

Figure 2 shows the test configuration for incoming inspection or performance verification. For on-going performance monitoring the termination on the right would be replaced with whatever the amplifier will feed in its intended application.

The coupling and attenuation values should be such that the input power to the PSP sensors is less than +10 dBm or 10 milliW.

The PSP sensors are then connected to a PC via USB cable and are controlled from the AR pulsewARe software, Figure 3. This software allows you to make a myriad of automatic measurements including peak amplitude, pulse width, pulse period, rise and fall time and much more. 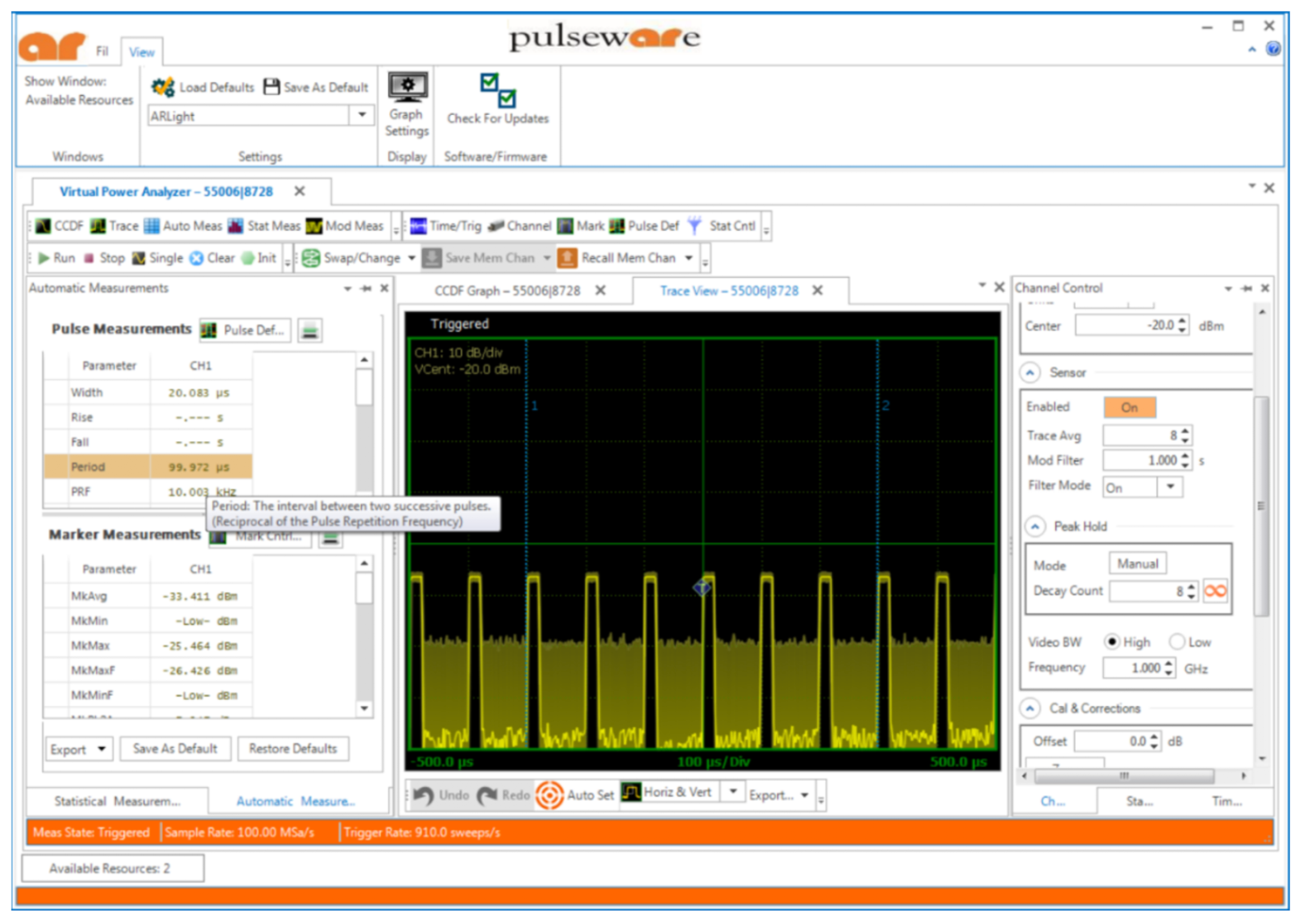 To date, pulsed high-power RF amplifier performance from 0.8 – 4 GHz has been dominated by low Mean Time Between Failure (MTBF) and low warranty TWTAs, but AR’s solid-state pulse amplifier designs offer better performance and reliability, and backed by the AR brand with a 3-year warranty. These amplifiers provide an attractive alternative to TWTA solutions. If you would like to learn more, feel free to contact one of our applications engineers at 800-933-8181 or visit our website at www.arworld.us.